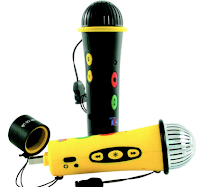 
The Easi-Speak is a USB microphone that allows you to record your voice (singing or speaking) and is suitable for students of all ages -they are guaranteed to bring your lessons alive!


Easily affordable, Easi-Speak can be purchased either as a single item or as a pack of five. Highly practical, made from robust plastic they are available in either black or yellow, you really don’t need to worry about even the youngest children handling these.


The great thing about the microphone is that no batteries are ever required, you simply charge it directly from your computer via the USB port. And if its time you’re short of and always want to make sure the microphones are fully charged and ready to use you can also purchase the Easi-speak charging hub for around £14.00. Easi-Speak really is very easy to use and is great for inclusion - students of all abilities can use them with little or no support from an adult. Once you have made a recording you can choose to download it as an MP3 or WAV file and use the sound recordings in third party software such as Garageband Podcasting, iMovie, Audacity and Moviemaker to make your own radio shows, interviews, adverts and news broadcasts.


The microphone does have a rewind and fast forward button on it but it can be a bit tricky trying to find the correct recording to use in the space of a lesson. It is far easier to download all recordings direct to your computer, play-back and listen, select the correct one to save and use, and at the same time delete the ones you don’t want.
A more expensive model is also available - the Easi-Speak Pro. Designed in a metallic silver casing, with a professional look, it probably has a greater appeal to an older audience. This offers additional features such as:

Ive recommended the use of Easi-Speak in many curriculum areas, for example you could use them in PSHE, Literacy or Citizenship for various ‘Think and discuss issues’ such as ‘Smoking’, ‘Should we ban bull- fighting?’ or ‘Is it cruel to have animals in a Circus?’.
After a whole class discussion ask your students to break out into smaller groups and discuss the issue further. You could use the microphones for a ‘for and against’ debate. After a degree of planning some students could record their key questions and concerns on the microphone and then play them back to have their questions answered by the class. If you have more time, why not follow this up with a series of individual student reports based on the group discus- sions and questions that have been raised. Students could go on to use the Easi-Speak to record their opinion on the matter. These could then be downloaded and used in a school radio broadcast or podcast.